The Birth of the Peachland Art Gallery 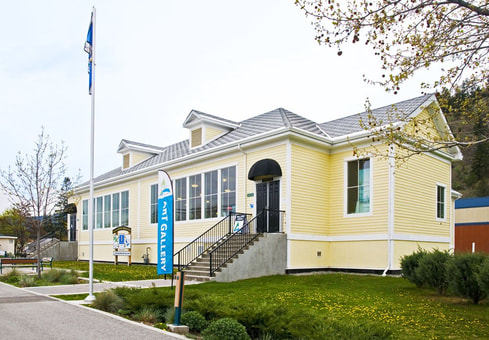 The Peachland Historic School, built in 1908, closed as a school in 2003. After nine years of vacancy it had deteriorated. Despite significant resistance there was enough support from old-timers to persuade the Town Council to restore the building.
​
The discovery in the attic of at least 2000 bats, considered an endangered species, was a prime motivator. Bats by law cannot be displaced without providing an alternative habitat. Consequently, after setting up video cameras in the attic connected to monitors, the bats have become a favourite educational display – their guano a source of revenue for the Visitor Information Centre as houseplant fertilizer.

With federal, provincial, and community grants, sufficient funds were accumulated to restore the building. In the year and a half of restoration false ceilings were removed and splendid arches revealed that for years had been concealed. It was also retrofitted with eco-friendly windows, lighting and heating systems.

The Historic School is the residence of two major tenants (apart from the bats) – the Boys and Girls Club in the rear and the Chamber of Commerce and Visitor Information Centre to the fore.

In the centre of the building is a magnificent hallway with two large alcoves and very high ceilings named the Mary Smith Hall in honour of a long-serving citizen who contributed significantly to the arts as well as to the town’s social fabric. It was proposed that this space be used as an art gallery by the Peachland Community Arts Council and a user agreement was agreed to with the Chamber of Commerce.

​Start-up was enabled with a generous grant from Peachland Council. Track lighting was installed as part of the restoration, and the furnishings of the Gallery were provided with the help of a Telus Optiks donation.

The impressive Peachland Art Gallery is in a beautiful location adjacent to the Visitor Information Centre and positioned right on the waterfront in the heart of downtown Peachland.

In October 2014 as a warm-up prior to the official opening of the Gallery, the University of British Columbia Okanagan held an interactive Eco-Art Incubator exhibition from July to August called the Yellow Schoolhouse Project. This included “a record of what people [had] thought about Peachland in the summer of 2014. Also on display [were] paintings, poems, and sound recordings that were created in a series of workshops inspired by local Peachland Community Arts Council members in conversation with Assistant Professor Denise Kenney (Interdisciplinary Performance) and Associate Professor Nancy Holmes (Creative Writing).”