TOP
the first time I remember seeing an artist in action, and it’s made an impression. I don’t recall exactly when I first encountered Bob Ross’ The Joy of Painting, but it would have been by accident as I idly flipped through the dials waiting for something to come on.
Bob Ross was a magician, one who could pull a landscape out of thin air. I was immediately seduced by the ease with which he could articulate a landscape that was nowhere in particular yet totally familiar at the same time. In the solitude of our basement I even tried to paint along, cobbling together whatever craft paints we had lying around to little effect or success. As I grew into my teens, my interests changed, and as the years passed my memories of Bob Ross faded and morphed from a magician to a pop culture icon and purveyor of kitsch.
While serving as a tribute to the artistic legacy of an artist whose name and work is as well known, this exhibition looks to explore the deeper questions around nostalgia, high and low art, art history, the cult of celebrity, pop culture, the art market and ultimately what is worthy of being exhibited and preserved in our museums. Bob and I both agree there are no wrong answers and I am fascinated to explore these questions.
The Penticton Art Gallery owes a great deal of thanks to Sarah Strohl and the team at Bob Ross Inc., and Elizabeth Bracey of the Visual Arts Center in Loudoun County, Virginia, which hosted the first gallery-curated exhibition of Bob Ross paintings.

The OSA has been unearthing the treasures found hidden in the many corners of the Shatford, and looking for ways to fundraise for the future. A yard sale was a logical choice. Cash, credit, and debit will be accepted. Physical distancing will be practiced, so please be prepared to take your time.

“As we prepare to vacate the Shatford Centre, we’re looking for ways to continue to offer unique arts programming,” said Executive Director Kim Palmer. “Every dollar we raise will help us cover our moving costs, so we can focus on bringing creativity and connection to the community.”

About Us: Established in 1960, the Okanagan School of the Arts (OSA) is one of the longest running schools of its kind in Canada. The OSA offers a variety of performing and visual arts courses and programs for students of all ages and stages of development.

VISIT OUR WEBSITE
We are open from 11am - 5 pm Tuesday through Friday and 10 am - 3 pm on Saturdays. Please feel free to make and appointment Mondays and other desired times by calling Renée at 250 488 4999
We offer a selection of paintings, bronze sculpture, Jewelry and ceramics by Canadian Artists as well as antiques. We are happy to help you find that special piece for your home or business.
Commissions available.
Enjoy a coffee or tea in our Paris Tea Room or book a Private Event.

The Oliver Community Arts Council is proud to present the Wine Capital Art Walk! The main event is on Saturday, May 9 from 10 am – 2 pm. Display / Demo Artists are accepted in a variety of media. They share space with businesses on Station Street. OR Artists can choose to participate as a Wine Barrel Artist. See below for details. The art walk will also include wine tastings, live music, draws, children’s art activities, food vendors, and live art demonstrations.

This Call for Artists is open to all visual media: photography, digital media, three-dimensional art such as pottery, sculpture, mixed media installations, metalwork, woodwork, jewelry and other artisan crafts; fibre and fabric arts, such as quilting, weaving, spinning, clothing/fashion; painting including acrylics, oils, watercolours; and mixed / other two-dimensional media, such as charcoal, ink, encaustic, and collage. Space may also be available for performing arts: street theatre and improv, dance, street musicians, and other performers. NOTE: This component will be limited by available space and noise level.
All artwork must be display ready. Sale pieces are welcome. Display artists must be present during the event and take responsibility for their own sales. See Display entry form below for details.

One of the main attractions at the Wine Capital Art Walk is the Wine Barrel Art demonstration and silent auction, running Tuesday May 5 – Saturday May 9. The live art event features up to 10 skilled artists who transform wine barrels into cherished works of art. Artists may choose to prepare at home AND / OR work onsite May 5 – 9 from 10 – 4 p.m. (or a portion thereof). Barrel art is a wonderful fundraiser for groups! This year, Oliver Eats Ltd parking lot at 6060 Station St will be the barrel art location. A great high traffic location to encourage bidding and promote the art walk later in the week. Silent auction bids are accepted by email and onsite and the finished barrels are sold to the highest bidders on the Saturday afternoon. See Barrel Art entry form for details.

Artists are invited to apply in one of two categories: as a Display / Demo Artist or as a Wine Barrel Artist. One low entry fee. NO commission charged for Display Artists. To cover barrel costs, a flat commission will be charged. All participating artists must be members of the Oliver Community Arts Council. Membership forms are available at www.oliverartscouncil.org or OliverCAC@gmail.com

Space is limited, and the event is popular.

For more information, contact OliverCAC @ gmail.com
NOTE:  Due to COVID-19 Pandemic the Oliver Community Arts Council is rescheduling the 2020 Fall Art Show and Sale for Saturday October 2 and Sunday October 3rd in 2021.
​The theme remains the same.
TOP 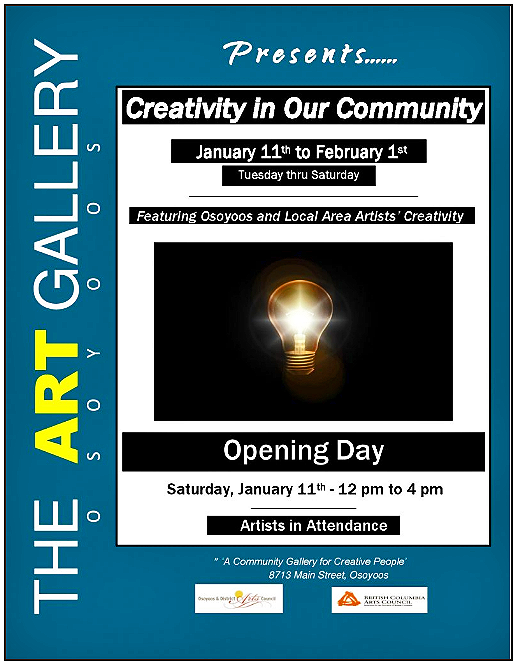 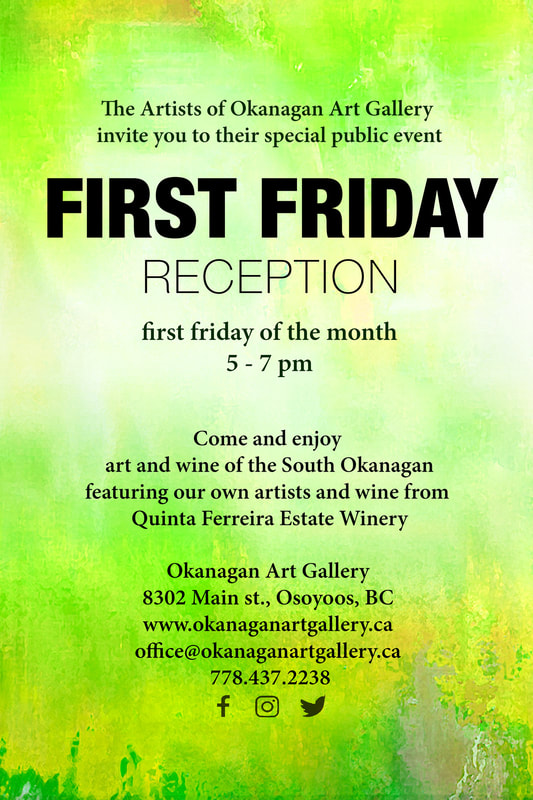 According to gallery advertising director, Diane Carter the show will feature the full roster of professional artists represented by the gallery which brings together artists from all mediums including oil and acrylic artists, lithography specialists, photographers and fiber artists.

This June “First Friday” will feature wine presented by Quinta Ferreira Estate Winery.  Don’t miss the opportunity to meet with the proprietor Maria Ferreira.  Learn more about their select wines and how they relate to art.